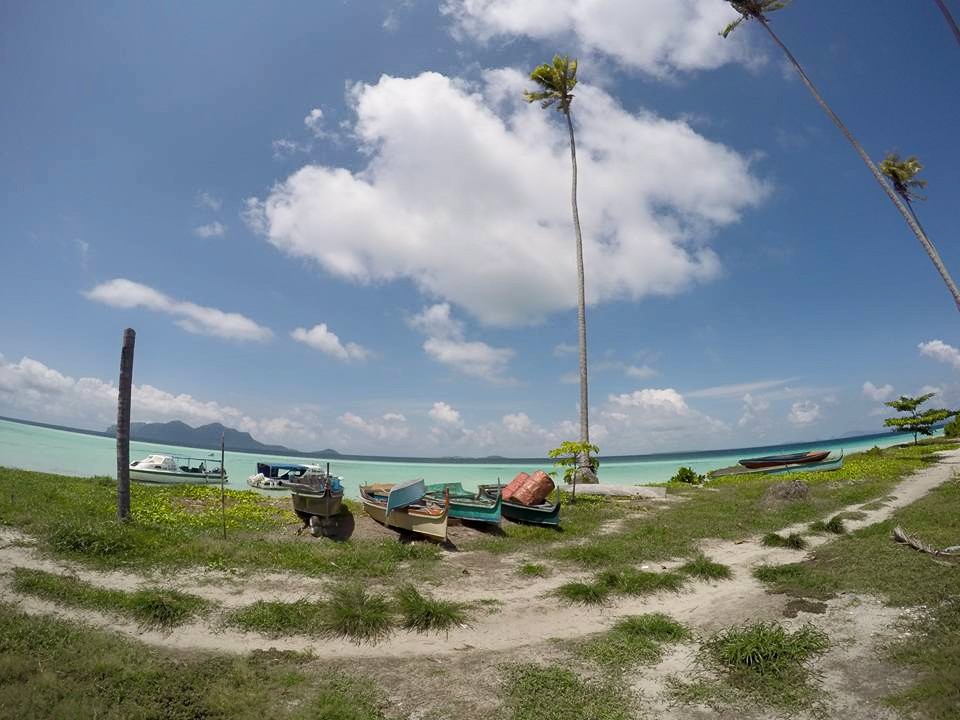 Semporna has many beautiful islands, endowed with turquoise water and pristine sand – look almost like heaven on earth. Yet if you walk around Semporna downtown, you will see many children running around barefooted, begging for money and food. Occasionally, you could find a woman walking with them. These children, mostly have hair with golden streak, resulted from the sea-water bleaching since young, are the children of the subsistence Bajau Laut fishermen. Most of them have no national identity even though they are born here. For many, their parents escaped the armed conflict and political instability in Southern Mindanao, the Philippines in the 1970s to seek refuge in Sabah. The Bajau Laut are also known as subsistence fishermen and sea nomad. Some of them still live in their traditional wooden boat known as lepa-lepa, while others have moved into wooden stilted houses. Both the lepa-lepa and house have no electricity and fresh water. The Bajau Laut children are trapped in the inter-generational cycle of poverty. Having no Malaysian citizenship, the children are unable to attend school (or even work). When they are not fishing with their parents, they are left roaming in the town, begging for food and money. In recent time, many of them have started the habit of glue-sniffing. It was said that children sniffed glue to escape the feeling of hunger. When you asked the children what do they feel when they sniff glue, they would tell you tales of being out-of-body experience, feeling of happiness which casts all their worries and humiliation away. It became addictive

These were my observations during my thesis fieldwork on the Bajau Laut community in Semporna. When I was in the Omadal island for my fieldwork, I was taken aback to see the similar patterns with the Bajau Laut children there:  they sniff glue, could hardly speak Malay and unable to attend school. Once, I get to speak to the children through a little girl of Bajau Laut and Bajau parentage, Sakinas (Kinas). She became my translator as she can speak both Malay and Bajau. Through her, I asked the Bajau Laut children (mostly  her cousins and playmates) if they want to go to school. Many of them shook their head because they think they are not smart enough for school. Many feel shy and inferior to be in school as they have never been to one. I then asked if they would give it a try if Kinas teaches them instead of a schoolteacher. Their eyes brighten up and nodded their heads. I asked the 11-year-old Kinas if she’s willing to teach her friends on weekends and receives a small allowance. She nodded. 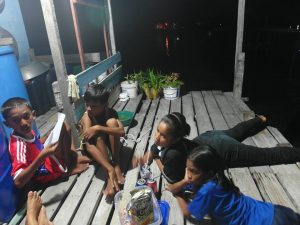 The first meeting after the trial class.

I quickly ran back to discuss with my host, Kak Roziah. She agreed to the idea and introduced two more people, her 11-year-old son, Fazlan and one 14-year old teenager, Khairul who can also be teachers. We immediately had a meeting. The three young teachers, Kinas, Khairul and Fazlan, agreed to a trial class (you can view the video here). During the trial class, they decided that they needed one more teacher to help, so they included a 14-year-old Syakila. That night, after the trial class, we had a meeting – the four young teachers, Kak Roziah and myself. The young teachers were all so excited and energised after their first teaching experience. I asked how did they feel, they replied “Best!” and indicated that they want to continue teaching. We discussed about the set up- school name – Iskul Sama DiLaut Omadal (Iskul), its vision, the allowances (bearing in mind that the allowances is not confirmed as it was dependent on donations), teaching plan, classes and etc. Everyone spoke their minds and we recorded our decisions in the meeting minutes. They agreed to teach their Bajau Laut friends basic literacy, arithmetic and arts. The next day, I travelled to Semporna town with Khairul and Kak Roziah to get the necessary stationery and posted a request for donation on my Facebook for Iskul! So, we finally started our first class 1 of August 2015! The formation of the Iskul would not be possible without the support of many friends who donated in cash and in-kind to sustain its operation for one year. Since Iskul was (still is) not registered, we created a Board of Trustees (Trustees) to keep tab of the donation and expenses as well as to support and oversee the operation. The Trustees was formed in August 2015 when Adzmin and Hui Ling joined us. We meet bi-monthly to discuss about Iskul progress and disburse monthly allowance to the young teachers (also known as Mastal Arikik – it means Little Teacher in the Bajau language).

The last one year has been a learning experience for the Board of Trustees. Personally for me, I saw how local knowledge and local community participation play a pivotal role in the sustainability of the project. It is the ownership of the local community that spurs the project further. The Bajau Laut children also taught me that according respect and dignity to the recipients of aid could possibly unlock the potential they have. I have not seen any group of children who are so eager to learn as these stateless children of Omadal. I’m ever grateful for this experience.

To find out about the highlights of our first year, read